When your Influence Impacts the President 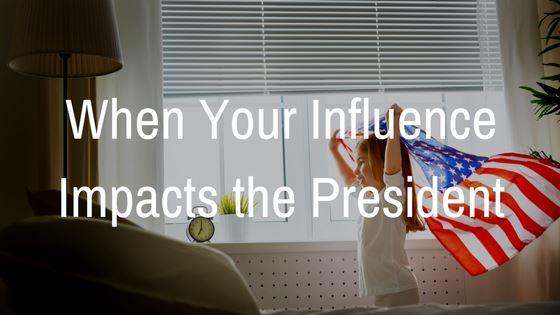 John Morton Blum was a history teacher at Yale University for 34 years.  When asked what he remembered about his famous student George W Bush, he replied; “I haven’t the foggiest recollection of him.”

While a student at Yale, Bush said to a classmate, “I’ve learned more from John Blum than any other teacher.”

In his memoir, Decision Points, Bush mentions Blum’s quote about not having “…the foggiest recollection of him.”  Then proceeds to tell the reader “But I remember Professor Blum.”

Little did Professor Blum know he was shaping and influencing a college student who one day would become the 43rd president of the United States. More than 40 years later President Bush clearly remembered and acknowledged the influence Professor Blum had on him.

Inside this little seven word phrase “I haven’t the foggiest recollection of him” is a very important truth.

Everyone possess influence, some have a lot, others a little.  Bottom line, we all have influence.  We never know who we’ll influence or its impact.

“Each day you are leading by example. Whether you realize it or not or whether it’s positive or negative, you are influencing those around you.” – Rob Liano

The great evangelist D.L Moody was brought to Christ by a Sunday School teacher.

“All that I am or ever hope to be, I owe to my angel Mother.” – Abraham Lincoln

Albert Einstein was introduced to science by a medical student that served as an informal tutor.

We start by influencing those we interact with and under our care.   Willing to push them forward, challenge, encourage, empower, stretch and love them to do and be more because none of us know when or how they will impact history.

Leadership is not about titles, positions or flowcharts. It is about one life influencing another. – John C. Maxwell

We need to put ourselves into positions where we can have a positive influence on others.   Whether it be a teacher, youth group volunteer, camp counselor or one of a thousand options, you pick.

Your influence could develop a future president, pastor, teacher, coach, camp director, business owner or parent.  And while you may not remember them, they will remember you.

You can get George Bush’s book here

How Not To Be a 25 Year Leadership Rookie