Leading Blind When Perception Does Not Agree With Reality 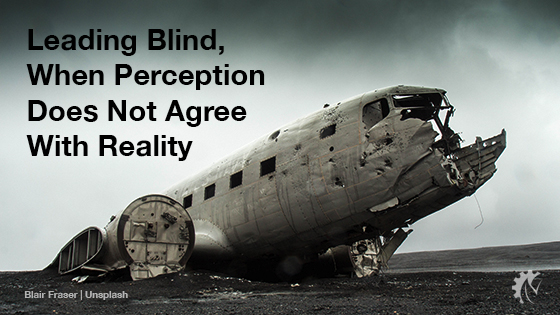 In 1999, John F. Kennedy, Jr. took off from Essex, NJ, in his private plane, headed to Martha’s Vineyard. An hour and a half later, he along with his wife and sister-in-law perished in a tragic ocean crash. Come to find out, many people have died in the same way.

The NTSB calls it “continuation of flight into conditions for which the pilot was not qualified.”

Outside of mechanical failure, it’s one of the major reasons for flight-related deaths. Approximately 40% of the NTSB fatal general aviation accidents fall into this same category.

Wikipedia describes it this way:

“Spatial disorientation is a condition in which an aircraft pilot’s perception of direction does not agree with reality. It is typically a temporary condition resulting from flight into poor weather conditions with low or no visibility. Under these conditions, the pilot may be deprived of an external visual horizon, which is critical to maintaining a correct sense of up and down while flying.”

While “spatial disorientation” is the technical term, the common everyday term is “flying blind,” or as my dad would say, “flying by the seat of your pants.”

As I was reading all of this, it was amazing how similar the life and death importance of flying blind is to the fundamental responsibility of good leadership. So, I thought it would be fun to adjust the Wikipedia definition and come up with a description of “leading blind.”

“Leading blind is a condition in which a leader’s perception does not agree with reality. It typically results from leading with poor leadership training, too much ego, or lack of character. Under these conditions, the leader may be deprived of an external visual horizon, which is critical to maintaining a correct sense of orientation while leading.”

Remember the old phrase “what you don’t know won’t kill you”?  This phrase does NOT apply to life, leadership, and flying a plane.

Leading blind simply guarantees an inevitable crash. The penalty of a leadership crash is always deeper, broader, and cost more than we realize. To be an effective leader, we must recognize that leading blind exists and can be deadly.

Wikipedia goes on to say, “Approximately 80% of the private pilots in the United States do not have an instrument rating; they are, therefore, prohibited from flying in conditions where instrument skills are required.”

Did you catch that? Eighty percent of pilots DON’T have instrument ratings. Ironically, I would say that most leaders don’t have leadership training. Without training, we won’t be the great leaders our family, business, and organization’s need. We can’t just fake it until we make it. When we fail to take advantage of the instruments, devastating things take place. It is essential that we read, study, and work with experienced leaders to develop the skills we need. Doing this will grow our leadership and teach us leadership navigation, which in turn will prevent us from crashing our families, businesses, and organizations into the ground.

Michael Doornbos in a personal story about flying blind said this, “In three to four seconds my body had betrayed me. I had no sense of the airplane turning. It was gradual and unnoticed. My senses had failed me, and thankfully my training took over to prevent what could have been a simple but devastating problem. Had I been tired or complacent, my fun night flight could have ended very differently.”

We must recognize that our ill-informed instincts can be wrong, and we can’t be complacent. We must be willing to follow the instruments. For leaders, the key instrument is character.  It is the foundation on which leadership is built. Without it, one’s leadership is built on sand. Character is often referred to as our personal compass. When we can’t see because things are cloudy and dark, our character points the way.

The key is to recognize that leading blind invites disaster, which makes it essential that we take the time to learn how to be great leaders and lifelong students of leadership. Most importantly, understand that our character is the foundation of leadership. Character is what everything else is built upon. At that point, our leadership will be instrument tested and proven capable.

Here is a video that vividly illustrates what happens when a pilot is flying blind.